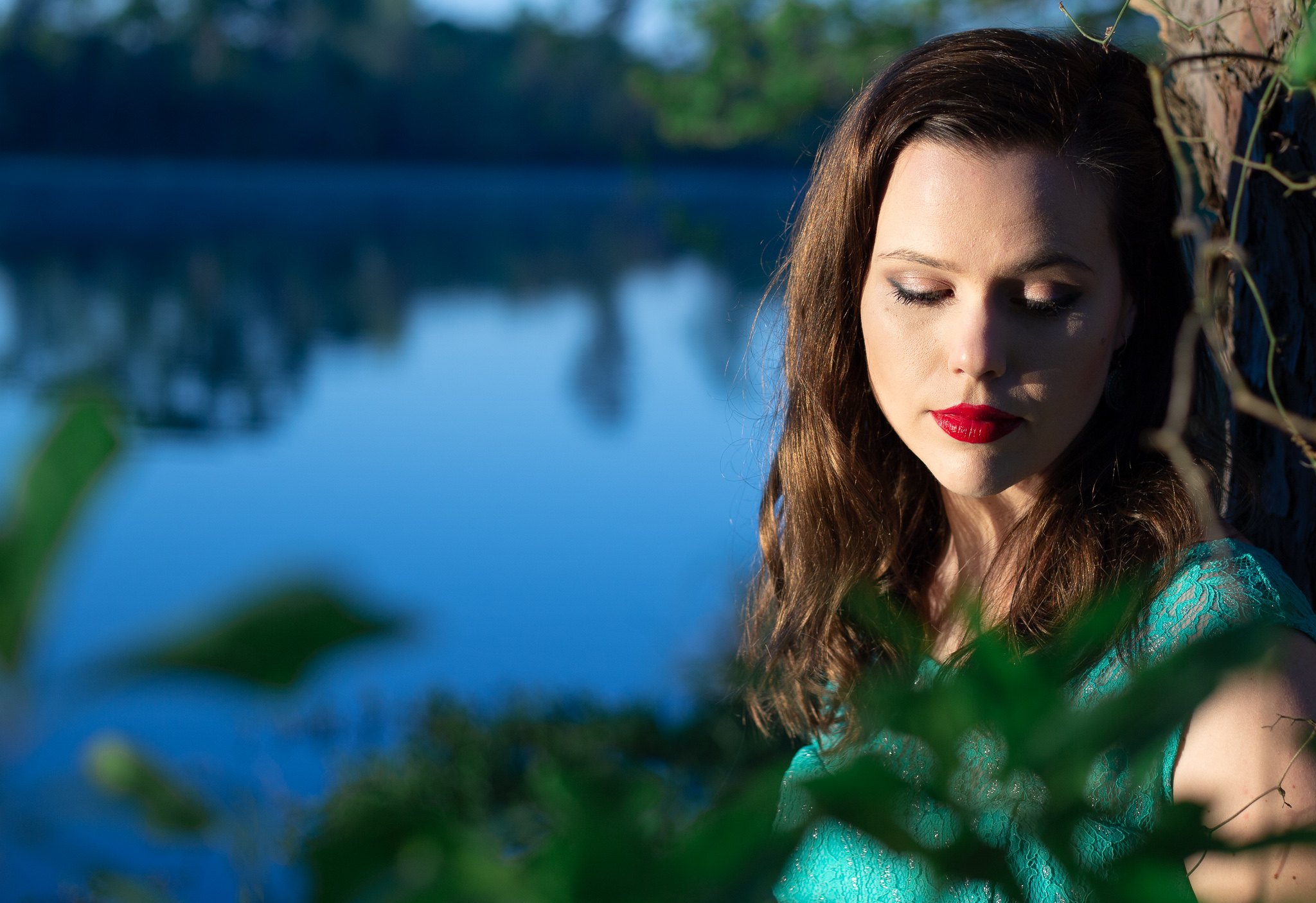 From The Beginning – Women of Verve

By Deborah Jean HallOctober 22, 2021No Comments

Who is Jesus to you?

I grew up a preacher’s daughter. Throughout my childhood Jesus wasn’t really a person to me as much as He was the answer to every Sunday school question. Even if the question was, “What has a bushy tail and climbs trees?” I’d be like, “Well it sounds like a squirrel, but this is Sunday school… so its Jesus.” Although I knew who Jesus was to the church it wasn’t until my twenties when I came to the knowledge of who Jesus was to me.

I prayed the sinner’s prayer in Sunday school when I was five-years old, but I didn’t understand what it meant. A five-year-old doesn’t understand the spiritual, so I only understood Jesus as a physical concept. I thought when I signed up to be a Christian, I wasn’t just getting hellfire insurance, but also a ticket to the easy physical life. I was taught in church that Jesus was our savior, friend and king. I thought if He was all those things, He wouldn’t let anything bad happen to me.

I learned the hard way, however, that salvation didn’t exempt me from trails and tribulation. In fact, even after that prayer, I went on to experience abuse, trauma, betrayal, slander, loss, homelessness, sexism, fear, and hopelessness. When I accepted Jesus at that young age I had no idea that in only ten years’ time I would be planning my own suicide. I was deciding between using a knife or swallowing a bottle worth of pills. I wonder if I were asked that night who was Jesus to me, what I would have said? Would I have given the Sunday school answer then? No, I probably would have said, “Jesus was someone who doesn’t care about me.” Something strange, however, happened that night before I made that decision. I heard a voice with a gentle authority, and it whispered to me, “Obey Me.” What’s strange about that is if that voice had said anything else, even “I love you.” I would’ve gone through with it. Because I didn’t believe in love. After everything I had been through, I truly believed love was a lie.

I told the voice, “Ok, I will obey you. But if nothing changes, I’m coming back to the pills.”

Looking back now I believe that voice was Jesus. I went to sleep and the next morning I made myself read one chapter of the Bible every day; no matter what. That was the beginning of what I like to call my Jesus rehab.

Although I wasn’t saved from trauma, I can look back at that night and realize no one was there to save me, except Jesus. That word I heard about Jesus in church, savior, was now personal. He was my savior.

I went on to graduate from Texas A&M University with a Bachelors of Science and I took another step into who Jesus was to me. As a scientist I had to ask the question, “Was Jesus my creator?” “Was He the creator of the world?”

That’s quite a statement. This verse declares who Jesus is, from the beginning.

Rev 21:6 Then He said to me, “It is done. I am the Alpha and the Omega, the beginning and the end. I will give water to the one who thirsts from the spring of the water of life, without cost.

Revelation 22:13 I am the Alpha and the Omega, the first and the last, the beginning and the end.”

So, I went back to the beginning.

Genesis 1:1 In the beginning

God created the heavens and the earth.

Did you know that earth is about 70% water, and 30% land? Did you know when you’re born your body is the same percentage? There are only five skin colors: brown, black, white, red, and yellow. Why? Because those are the colors of dirt. The dust we were made from (Gen. 2:7). Adam was made from the dust.

Genesis 1:2 And the earth was a [a]formless and desolate emptiness, and darkness was over the [b]surface of the deep, and the Spirit of God was hovering over the [c]surface of the waters. 3 Then God said, “[d]Let there be light”; and there was light.

What’s the story here? It’s the story of you in Christ from the beginning. Like the earth on first day of creation you too were once formless and void and in darkness in your mother’s womb, and then God said let there be light. But what’s the light on the first day?

John 8:12 Then Jesus again spoke to them, saying, “I am the Light of the world; the one who follows Me will not walk in the darkness, but will have the Light of life.”

Sperm is also called the seed.

Galatians 3:16 Now the promises were spoken to Abraham and to his seed. He does not say, “And to seeds,” as one would in referring to many, but rather as in referring to one, “And to your seed,” that is, Christ.

My story and your story in Christ is not just physical, its spiritual as well.

1 John 1:1 What was from the beginning, what we have heard, what we have seen with our eyes, what we have looked at and touched with our hands, concerning the Word of Life— 2 and the life was revealed, and we have seen and testify and proclaim to you the eternal life, which was with the Father and was revealed to us— 3 what we have seen and heard we proclaim to you also, so that you too may have fellowship with us; and indeed our fellowship is with the Father, and with His Son Jesus Christ. 4 These things we write, so that our joy may be made complete.5 This is the message we have heard from Him and announce to you, that God is Light, and in Him there is no darkness at all. 6 If we say that we have fellowship with Him and yet walk in the darkness, we lie and do not practice the truth; 7 but if we walk in the Light as He Himself is in the Light, we have fellowship with one another, and the blood of Jesus His Son cleanses us from all sin.

Now I can go through every day of creation with you, and it tells the story of Jesus. But let’s go to the sixth day, when God made man and woman.

Genesis 2:21 So the Lord God caused a deep sleep to fall upon the man, and he slept; then He took one of his ribs and closed up the flesh at that place. 22 And the Lord God [s]fashioned into a woman the rib which He had taken from the man, and brought her to the man. 23 Then the man said,

24 For this reason a man shall leave his father and his mother, and be joined to his wife; and they shall become one flesh. 25 And the man and his wife were both naked, but they were not ashamed.

Moses wrote this, but Adam and Eve didn’t have a mother or father. So who is he talking about in this verse? When Jesus was dying on the cross he was opened up at the side. Blood and water poured out of his body which medically only happens in birth.

John 19:34 Yet one of the soldiers pierced His side with a spear, and immediately blood and water came out.

1 Corinthians 15:45 So also it is written: “The first man, Adam, became a living [r]person.” The last Adam was a life-giving spirit.

Adam was created and he was placed in a garden, he was put to sleep, he was opened up at the side, a rib was taken from him, fashioned into a woman, and she was brought back to him, and he called her woman.

Ephesians 5:25 Husbands, love your wives, just as Christ also loved the church and gave Himself up for her, 26 so that He might sanctify her, having cleansed her by the washing of water with the word, 27 that He might present to Himself the church [q]in all her glory, having no spot or wrinkle or any such thing; but that she would be holy and blameless. 28 So husbands also ought to love their own wives as their own bodies. He who loves his own wife loves himself; 29 for no one ever hated his own flesh, but nourishes and cherishes it, just as Christ also does the church, 30 because we are parts of His body. 31 For this reason a man shall leave his father and his mother and be joined to his wife, and the two shall become one flesh. 32 This mystery is great; but I am speaking with reference to Christ and the church.

Jesus left His Father in heaven and His mother, Mary, to be joined to his wife, you, the church. He died on the cross (some scriptures write about death as falling asleep), he was opened up at the side, blood and water poured out of Him (the birth of the church), he was placed in a garden tomb, and when He rose the first word He spoke, was guess what? Woman.

Why am I telling you this? Because it is your story. This Bible tells us who we are to Jesus, from the beginning, from Him. Because we were taken out of Him to be fashioned and brought back to Him. It says Adam’s skin was closed, but there is nowhere in scripture that says Christ’s side has been closed yet. He’s given you a freewill choice to come to Him. There is still time to say “yes” and come back to the one from whom you were taken out of.

Ecclesiastes 3:11 He has made everything appropriate in its time. He has also set eternity in their heart, without the possibility that mankind will find out the work which God has done from the beginning even to the end.

2 Thessalonians 2:13 But we should always give thanks to God for you, brothers and sisters beloved by the Lord, because God has chosen you from the beginning for salvation through sanctification by the Spirit and faith in the truth.

Colossians 1:15 He is the image of the invisible God, the firstborn of all creation: 16 for [y]by Him all things were created, both in the heavens and on earth, visible and invisible, whether thrones, or dominions, or rulers, or authorities—all things have been created through Him and for Him. 17 He [z]is before all things, and in Him all things [aa]hold together. 18 He is also the head of the body, the church; and He is the beginning, the firstborn from the dead, so that He Himself will come to have first place in everything. 19 For [ab]it was the Father’s good pleasure for all the [ac]fullness to dwell in Him, 20 and through Him to reconcile all things to Himself, whether things on earth or things in [ad]heaven, having made peace through the blood of His cross.

So, who is Jesus to me? He is my beginning, my light, my living water, the seed in me, He is the master scientist and engineer who holds all things together, my grace, my truth, my savior, my husband, my friend, my redeemer, my comforter, my provider, my king, and my eternity. He is someone one who cares about me. He is love.

My circumstances might not change, but Jesus changed me. He fashioned me through sanctification. And like the Lord God brought Eve to Adam, Jesus brought me (the church) to Himself.

Who is Jesus to you? Don’t go one more day without knowing.

Letting Go: A Story of Healing

Letting Go: A Story of Healing